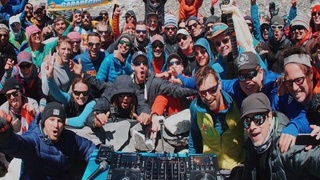 Top British DJ Paul Oakenfold braved thinning air and freezing temperatures to host the "highest party on earth" at Everest base camp on Tuesday (Apr 11), playing to around 100 climbers - all in full mountain gear.

Oakenfold traveled for 10 days to reach the location just below Mount Everest, the world’s highest mountain. The base camp sits at 5,380 meters, while Mount Everest’s peak reaches 8,848 meters.

The 53-year-old dance music pioneer mixed his set on a stone stage in the middle of the Himalayan mountain range in Nepal.

"I'm not going to pretend it was easy to get here, but it has been a wonderful trek,” he told the French Press Agency, AFP, by phone. “If you could see the view I'm looking at, it is very inspiring."

More than 100 people withstood thin air and freezing temperatures to attend the event. Video showed fans wearing heavy winter clothing and hiking equipment as they moved to the music in the middle of snowy mountains.

Oakenfold called his mountain party “truly amazing.” “I feel very lucky to have played here. We did a wonderful event and had people from all over the world, I feel very blessed," he told AFP.

The Grammy-nominated DJ and producer said that on the way up, he tried to spend time with local people and explored Nepali music. He donated the equipment used to the local community.

Money raised by the performance will also be donated to two organizations to help survivors of Nepal’s 2015 earthquake – the Himalayan Trust and Supporting Nepal’s Children. The earthquake killed about 9,000 people and left thousands homeless.

Oakenfold – who has teamed up in the past with Madonna and the rock group U2 - admitted the setting was very different from his usual performances at top world dance clubs.

The event is expected to result in a new album and documentary about his musical mountain trek.

“The highest party on earth” comes just before the busiest part of the climbing season. Hundreds of climbers will spend weeks at the base camp before attempting to reach the top of Mount Everest.