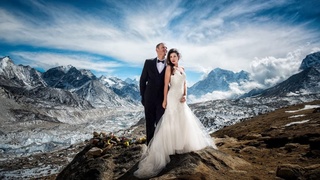 THE AMERICAN COUPLE WERE MARRIED ON TOP OF THE WORLD

Marriage is a natural desire to make memorable. The couple married in the United States to carry the same desire to come to Nepal. They plan to get married one years had the highest summit of Mount Everest.

California United States 35-year-old James Sissom and 32-year-old Ashley Schmieder their big day was captured at Everest Base Camp, around  17 thousand feet above sea level reached by the marriage of adventure. They were married during the Everest Trekking. For these couples, this is also the unforgettable moment.

"We have long thought, and decided that traditional wedding - it's not for us, - says Ashley. - We had a great attitude to family and friends, but still decided to run away from everyone and arrange a fabulous honeymoon. We both adore hiking, went to the mountains to an altitude of 3000 meters, but we knew that a three-week path to the base camp on Mount Everest will be harder than all, through what we already had a chance to go through. "

The American couple were accompanied by wedding photographer Charleton Churchill, who had only a small window to shoot the occasion, as temperatures stood at between –20 and –15 Celcius and James required oxygen to tackle his sickness on the mountain.